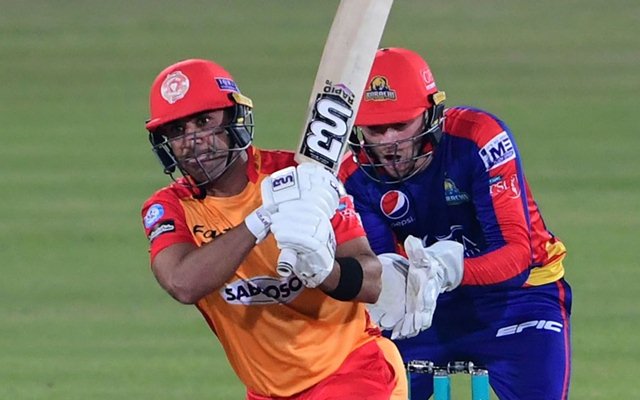 Islamabad United registered their second consecutive victory of this season of Pakistan Super League as they defeated Karachi Kings by 5 wickets. Karachi had posted a total of 196/3 in 20 overs after they were invited to bat first. Their openers Sharjeel Khan and Babar Azam added a record partnership of 176 runs for the first wicket.

Sharjeel hit a glorious century scoring 105 runs off 59 balls with the help of 9 fours and 8 sixes. Babar was criticized for playing a bit slow as he scored 62 runs after facing 54 balls. Babar hit 6 fours and 1 six in his innings.

Chasing this target, Islamabad United lost their first two wickets for only 13 runs. However, Alex Hales accelerated the run-scoring and hit 46 runs off only 21 balls. Faheem Ashraf, Iftikhar Ahmed, Asif Ali, and Hussain Talat too played an important part in helping the team chase the total. Islamabad won this match in 19 overs by 5 wickets. Hales was awarded player of the match for his match-winning knock.

Let’s look at important stats and numbers from the sixth match of PSL 2021:

176 – The partnership of 176 runs between Sharjeel Khan and Babar Azam is the highest ever for any wicket in the PSL history. Earlier, Liam Livingstone and Babar Azam had shared a 157-run partnership for the first wicket against Multan Sultans in PSL 2019.

29 – Aamer Yamin conceded 29 runs in an over against Islamabad United. This is the record for the most expensive over in PSL history. Before him, Mohammad Irfan had given 28 runs in one over against Peshawar Zalmi in PSL 2018.

197/5 – Islamabad United registered their biggest ever chase in PSL history in this match. Earlier they had scored 183/9 in a chase against Lahore Qalandars in 2020.

2 – Sharjeel Khan hit his second century of Pakistan Super League. He has become only the second player after Kamran Akmal to hit more than one hundred in PSL. Akmal has 3 tons to his name in the league.

393 – A total of 393 runs were made in both innings of this match. This is the sixth-highest match aggregate in PSL.

1602 – Babar Azam and Kamran Akmal are in a tight race for the spot of highest run-scorer in PSL. After this match, Babar Azam has now reached a tally of 1602 runs in 49 matches. He has hit 15 half-centuries in the league, most by any player in PSL history.

8 – Sharjeel Khan hit 8 sixes in his innings, which is the joint third-most by a player in an innings in PSL.